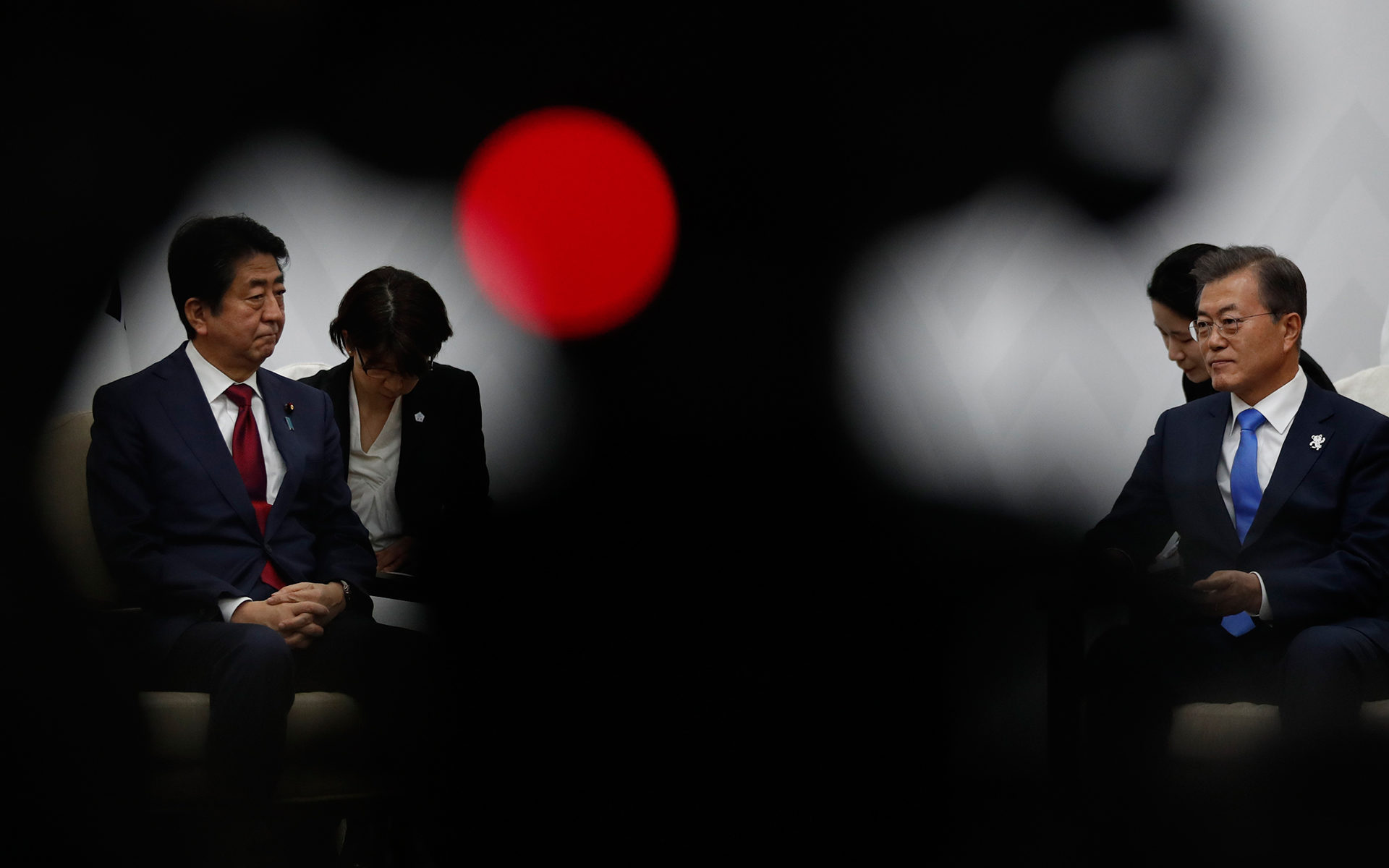 Diplomatic relations between the two Northeast Asian democracies have had their ups and downs since 1945. Their partnership today faces a great number of problems ranging from territorial disputes to different approaches in dealing with North Korea. History interpretation is, however, by far the biggest one.

It is exactly history that divides both nations, making their disputes more and more toxic. Even though back in 1965 South Korea and Japan normalized their relations and decided to separate business from politics, this principle is not working today. History quarrels, if unresolved, threaten to undermine the entire architecture of the bilateral relations, which in turn will have negative trade and security implications for Northeast Asia.

South Korean president Moon Jae-in has been bashing Japan for the unsolved ‘history issues‘ or, in other words, for not apologizing properly for the Second World War crimes since his first year in office. The main target of Moon’s criticisms was the 2015 agreement on compensating Korean comfort women – elderly females, who were sexually exploited by Japanese soldiers during the occupation era.

Up until now Tokyo’s reaction to the acerbic statements of left-wing Korean politicians took the form of diplomatic protests, with no actual countermeasures. The diplomatic situation, however, deteriorated dramatically in late 2018, when the South Korean Supreme Court ruled that exploited South Koreans have the right to demand compensations from the Japanese companies. Japan’s reaction to the ruling was strongly negative, with its officials arguing that it will open Pandora’s box of the Second World War issues.

Considering the number of living victims, the ruling might result in heavy financial losses for a number of Japanese corporations. Seoul already froze some of the Japanese assets in order to force out the necessary compensation payments.

After the ruling Tokyo, for the first time ever, decided to retaliate and imposed trade sanctions by removing South Korea from its trade whitelist. Even though it stated that the ruling had nothing to do with the restrictive measures, official emails from the Japanese Foreign Ministry interconnecting the two undermine this claim. Japan’s justification that South Korean companies inadequately managed specialized chemicals with potential military use also sounds vague.

What was the real driver of Japanese actions? Interestingly enough, the restrictive measures were introduced only in the summer of 2019, even though the ruling came in the autumn of 2018. The trade spat also overlapped with the election to the upper house of the Japanese parliament. It is, therefore, logical to assume that Japanese prime-minister Abe decided to mobilize voters by showing his hard stance on the ongoing dispute.

The infuriated South Korean government responded by stripping Japan of its privileged trade status and blasted Tokyo in mass-media. President Moon went so far so as to claim that ‘Korea will not be defeated by Japan again’, referring to the country’s colonial past.

After a couple of weeks South Korea toned down its rhetoric in mid-August and president Moon even offered an olive branch to Japan in his Liberation Day speech, the crisis seemed to have abated. But this was clearly not the case.

Prime-minister Abe was not too enthusiastic to negotiate with Seoul at that point. This refusal, in turn, caused yet another round of tensions resulting in South Korea scrapping the military intelligence-sharing pact with the Japanese government. The escalation and mutual insults reached such a point that even Beijing felt compelled to intervene to help its neighbors mend fences. The bilateral relations are not likely to get better soon, unfortunately.

Looking at how seemingly irrationally both parties behave, one should look into different levels of understanding that they use in their argumentation in order to see why there will inevitably be more clashes. The current crisis only reflects decades of mutual resentment and deep social and emotional wounds that both countries bear.

Abe administration uses legal arguments to buttress its claims. Legally speaking, Seoul agreed to the normalization of diplomatic relations on the conditions of the 1965 agreement. To compensate for the atrocities of the colonial rule, the Japanese provided South Korea with 300 million USD in grants and 200 million USD in loans (appr. totally 4 billion USD as of 2019). Tokyo assumed that the generous sum would solve the problems for good.

Interestingly enough, according to the negotiations minutes of the 1965 agreement, the Japanese delegation inquired whether Tokyo should compensate Korean victims individually, but Seoul rejected the offer. Its representatives insisted that their government would deal with the war-time laborers compensation issue independently.

The problem is that the comfort women issue was not even discussed back then. The authoritarian Park Chung-hee administration brutally oppressed anyone, who dared to speak out again the agreement including comfort women. Moreover, admitting being a comfort woman stigmatized you for life, which prevented many victims from seeking true justice.

South Korea, in turn, and particularly its society use the ethic arguments. After the democratic transformation in South Korea in the 1990s the stories of comfort women were made public, causing an international public outrage. This empowered many Koreans to sue their own government as well as Japanese companies for compensations.

The new generation of Japanese society, however, is tired of being constantly hammered by South Korea and other Asian nations, including China, for an endless list of real and fictional crimes committed by their ancestors. After the compensation payments and many statements of remorse expressed by Japanese ministers, emperors, and heads of government, both the Japanese leaders and society feel that they apologized enough.

In this case, Tokyo’s unwillingness and inability to communicate with South Korean society and its fears that litigious individuals all over East Asia will use the Korean precedent hinder the reconciliation process. By projecting its economic power politically, Japan hints that it can deal significant economic damage to Seoul, if Koreans become excessively pushy. Unfortunately, such measures are counterproductive because they deal even more damage to Japan’s already unfavorable image in South Korea.

That is not to say that the sitting South Korean administration behaves rationally either. Using the demonization strategy against Japan is very unwise, which was demonstrated by Tokyo’s economic countermeasures. Keeping old grudges alive can be a useful political weapon, but it threatens the future of the South Korean-Japanese relations, deals economic damage, and makes inter-societal reconciliation less possible. Moon administration should rather focus on involving some of the war crime victims into the diplomatic process to ensure that future agreements will be stable.

As one witnesses the collapse of the economic foundations of the South Korean-Japanese cooperation, they might ponder where Seoul and Tokyo are heading politically. Indeed, if not checked, the ongoing clashes are likely to have long-term effects and will burden bilateral relations for at least two more years. Even then, however, a bitter aftertaste of the conflict when Japan used economic sanctions as a tool of political pressure for the first time will not be forgotten easily in South Korea. Japan’s ruling party, on the other hand, does not show any inclination to back down on history issues. So the dispute are very likely to become even more dramatic.

Both Tokyo and Seoul share the burden of fault for this vicious cycle of never-ending arguments. Mutual accusations and unwillingness to take responsibility destabilize the regional security system and roil the global tech market. Unless history is put to rest in museums where it belongs, the ghost of yet another conflict will keep haunting the democratic nations of Northeast Asia. 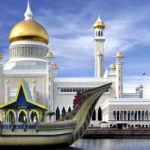 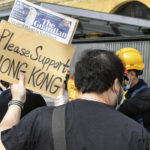